Although there have been experimental backup for the ecological theory explaining the mechanisms underlying community stability, evidence from natural ecosystems was lacking owing to the challenges of tracking rapid changes in interspecific interactions and identifying the effect of such changes on large-scale community dynamics.

In order to test the current ecological theory, the team analyze time series of a 12-year-long dataset of fortnightly collected observations on a natural marine fish community in Maizuru Bay, Japan and observe that short-term changes in interaction networks influence overall community dynamics. They show that the strengths, and even types, of interactions change with time; that is, the interaction network is dynamical but not static (Figure 1). Moreover, the dynamical pattern of network critically affects the stability of the community through time. Specifically, the team finds seasonal patterns in dynamic stability for this fish community that broadly support expectations of current ecological theory- the dominance of weak interactions and higher species diversity during summer months are associated with higher dynamic stability and smaller population fluctuations.

By the widely applicable nonlinear time series analytical framework developed by the team, it is found that interspecific interactions, community network structure and community stability are dynamic properties, and that linking fluctuating interaction networks to community-level dynamic properties is key to understanding the maintenance of ecological communities in nature. Those understandings have important implications for ecosystem managements and conservation. Most excitingly, relating fluctuating interaction networks to community stability provides a promising approach to comprehend how to maintain natural ecological communities systematically. The research also highlights the importance of long-term time series monitoring for ecosystem managements. 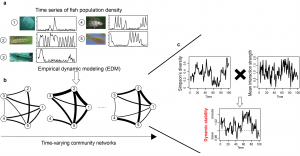 Figure 1. Based on the empirical time series data collected from the natural fish community in the Maizuru Bay, Japan (a), empirical dynamic modeling (EDM) was used to reconstruct the interaction network among fish species at each time step (b). The structure of the networks is highly dynamical, in which some of the important network properties, including (c) mean interaction strength and dynamic stability, fluctuated through time. In particular, the dynamic stability is a critical index measuring the tendency of a dynamical system returning to its original state upon perturbation. Interestingly, the networks with many weak interactions and high diversity usually facilitate dynamic stability. (Fish photo credit: Reiji Masuda)

You have Successfully Subscribed!

This website uses cookies to improve your experience. If you continue to use this site, you agree with it.