Within PRODIGIO, we use chemical information to detect early-stage changes in the biological processes and prospective failure of the PRODIGIO bioreactors.

Chemistry plays an important role for the growth of aquatic microalgae. Just as for potted plants at home, the availability of nutrients controls reproduction and growth. Moreover, organic compounds are produced by the microalgae and consumed and recycled by bacteria. Some of these compounds (called metabolites) are released from the living cells and are dissolved in the surrounding water. These molecules represent a chemical smell that can serve for chemical communication, defence and orientation (watch video). By the time an algal cell dies and decays, it also releases a plethora of organic compounds.

The entirety of the biological processes in an algal culture result in a highly complex mixture of molecules that can be analysed with a technique called ultrahigh-resolution mass spectrometry. In every given water sample, the method detects thousands of different molecules (see figure). For the evaluation of these big data sets, we developed open-access software that allows exploitation, visualization and full reproducibility of the results (www.awi.de/en/ume). 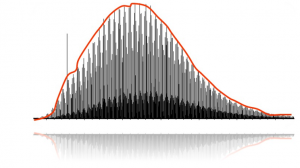 Figure. Ultrahigh-resolution mass spectrometry analysis of a water sample: Every black line represents at least one chemical compound released by biological processes in the reactor (Source: B. Koch; Alfred-Wegener-Institut).

By comparing changes in our molecular fingerprints with other information on the state of the PRODIGIO bioreactors, we aim at identifying those compounds that conveniently indicate major shifts in the biological processes that would decrease the yield of the bioreactors. Therefore, chemical information can help increasing the performance of microalgae biomass production.

Video. The video shows how important chemistry can be for biomass production. A predator carries out a focussed attack on a prey individual. Since both microalgae are single cell species, they have no optical orientation. Hence, chemical sensing of metabolites allows the precise strike here (Video: U. Tillmann; Alfred-Wegener-Institut).

This article has been written by Boris Koch, Alfred Wegener Institute.

You have Successfully Subscribed!

This website uses cookies to improve your experience. If you continue to use this site, you agree with it.