What is Algae Culture? 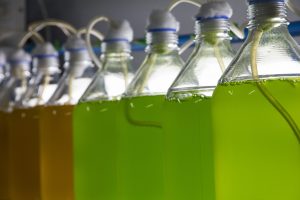 Marine plankton culture with light and oxygen in Scientific laboratory

Algae are a very diverse group of photosynthetic organisms that include microalgae and seaweeds (or macroalgae). As photosynthetic organisms, they use sunlight energy and carbon dioxide (CO2) to produce biomass. Algae and their prokaryotic counterparts, cyanobacteria, are responsible for almost half of the global net primary production (the other half being accounted for by terrestrial plants), sustaining virtually all aquatic life and exerting a fundamental control on global climate through carbon sequestration into the deep ocean. They produce such a massive amount of organic matter despite representing only 1-2% of the planet’s total photosynthetic biomass, which highlights their extraordinary productivity. Microalgae and cyanobacteria are 3 to 4 times more efficient than terrestrial plants at converting sunlight energy into biomass and can achieve up to one order of magnitude higher biomass production yields (i.e. production of biomass per unit of area used for cultivation). Furthermore, they can grow in brackish, marine and sewage waters, which are not suitable for agriculture. In fact, because wastewater contains many of the essential nutrients that microalgae need to grow, the use of microalgae in wastewater treatment, while still under development, would improve the efficiency of the sanitation process by taking up inorganic nutrients and other contaminants from wastewater while providing a source of low-cost biomass.

Microalgae cultivation (or algaeculture) is one of the most promising sources of biomass for the future. It is sustainable, does not compete for land with agricultural crops, and does not require freshwater resources. The outstanding yields of microalgae mean that, compared to terrestrial crops, we need much less cultivation area to obtain the same amount of biomass. Furthermore, their nutrient needs can be met through wastewater supplies or by recycling and re-circulating the nutrients making up their biomass. However, the large-scale implementation of algaeculture suffers from the same problems than conventional agriculture has faced for centuries. For a long time, agronomists and farmers have struggled to prevent the collapse of their crops, often ruined by pests and diseases. Decades of agricultural research have enabled the development of highly efficient crop protection measures that have given rise to previously unthinkable crop yields. For example, corn yield (i.e. corn production per unit of land used) has increased five-fold over the last eighty years thanks, among other things, to breakthroughs in pest management. Biological contamination is a widespread and recurrent threat to microalgae mass cultures, where virtually all of the biomass produced by microalgae can be consumed by parasites and predators in a matter of days. The expansion of algaeculture necessarily implies the development of pest prevention and mitigation measures that increase the yields of microalgae and the amount of harvestable biomass. However, these technologies are currently underdeveloped.

Within the framework of the research project ‘Developing early warning systems for improved microalgae PROduction and anaerobic DIGgestiOn, PRODIGIO’, we aim to establish a base of knowledge for the development of a system failure prediction technology that increases the performance of microalgae production and biomass-to-biogas conversion systems. We envision that this technology will contribute to advance towards a more favourable techno-economic, environmental, and social performance to achieve a more sustainable source of biogas from microalgae biomass.

Just as agriculture represented a momentous change in the history of humanity and of our planet, the expansion of algaeculture is called to play a crucial role in the evolution of our society towards a more habitable future planet.